BranfordSeven.com - Person of the Week 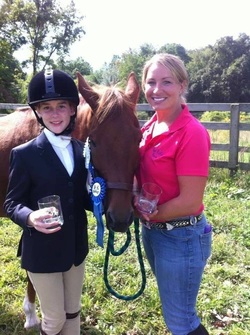 When Taylor Chambers-Scussel logged onto Facebook one morning in May 2012, she had no idea she would end up rescuing a 9 year-old horse named Norman from a slaughterhouse auction later that day.

“His picture kept coming up on my phone every time I logged on,” she says. “It wasn’t even a good picture. You could only see him through the bars of a fence. But I couldn’t get him out of my head.”

Chambers-Scussel, primary operator of Fox Field Farm in Branford, wasn’t looking to fill the empty stable in her barn with another horse. But when she saw Norman’s photograph, she felt compelled to contact the New Jersey-based auction house to inquire about the purchasing process: “When they told me over the phone that all I would need to do is give them a credit card number, I almost felt sick to my stomach. I knew if it was that easy, I was in trouble,” she says.

There are currently no federal laws banning horse slaughter in the United States, though a five-year ban on funding for inspections of horse processing plants established in 2007 forced the closure of the only three slaughterhouses in the United States. Since then, American horses marked for slaughter have been transported--often under inhumane conditions--to Canada and Mexico. The majority of horse meat produced during slaughter is exported overseas for human consumption and the rest is sold to zoos.

But the tragic truth about the vast majority of horses sold for slaughter is that they are healthy. Commonly, they are pets outgrown by their owners, who may be unaware that the buyer making them an offer for their horse is planning to sell it at a slaughterhouse auction. Horses like Norman, young and in good health, are shipped off to slaughter rather than being given a second chance in a new home.

Chambers-Scussel, who calls horses her “zen,” decided to give Norman his much-needed second chance.

“I bought a horse off the internet with nothing but a two-sentence description,” she says. “I paid for him with my credit card. All I could think was that he was the perfect age for my three daughters, that by the time he was well-trained they would be old enough to start riding him. But it was a huge risk--I knew next to nothing about him.”

A few days later, Norman arrived at his new home at Fox Field Farm, where he was immediately quarantined to protect the health of the farm’s other horses and given a good bath and veterinary care. Chambers-Scussel had virtually no information about his overall health and care, riding experience or temperament. Though it was clear that he had not been abused or neglected by his previous owners, he had also not been properly cared for.

“We could tell he had been loved, that he was probably someone’s pet pony,” says Chambers-Scussel, who has a Bachelor’s degree in animal science from UCONN and spent many childhood years riding and working with horses. “I was seven months pregnant at the time, so I couldn’t ride him. We had him professionally evaluated and we did some intensive work with him to get a feel for his temperament and foster trust.”

Once Norman was declared healthy and Chambers-Scussel felt confident he was safe for her riders to be around, he began residing in the newly-renovated barn at Fox Field Farm, in a bright and well-maintained 12-foot by 12-foot stall. Fox Field Farm is owned and operated by Chambers-Scussel and her family, who also own Shelley’s Garden Center in Branford. The Chambers family constructed the new barn themselves in November 2011 and have been building up a community of riders ever since, instilling not only a love of horses but strong values in the many young girls who come to the farm to ride.

“I want this place to be a sanctuary and a home away from home for the girls who come here,” says Chambers-Scussel. “But I’m strict about teaching these girls how to work hard, learn their manners and just be nice human beings.”

Fox Field Farm is open to anyone, whether they want riding lessons or simply want to be around horses. Chambers-Scussel doesn’t charge for lessons. Instead, she asks that riders participate in the maintenance and upkeep of the barn and animals, learning how to groom the horses, muck stalls and pick pastures. Riders “pay” the farm with their time, not their money; Chambers-Scussel says this ensures that lessons are available to anyone who has an interest and that her horses are always being showered with attention.

“The barn is something different for everyone,” she says. “We have mothers and daughters who come here together, women who come to muck stalls instead of going to the gym, older women who just want to be around the horses. It’s therapeutic for a lot of people.”

In addition to riding lessons, Chambers-Scussel also hosts summer camp sessions and pony parties, both of which are her only source of income for the farm and help to offset expenses such as hay and supplies, veterinary costs and maintenance of the barn and property. Though the farm needs a certain amount of income to function, it's important to Chambers-Scussel that it maintains its family atmosphere.

“We don’t want to just be a business. This is a family farm. We’re interested in people, not numbers,” she says. “We want people here who have the love and the heart for horses.”

It’s that love and heart for horses that led Chambers-Scussel to take a chance on Norman back in 2012, despite not knowing what the outcome would be. He could have been sick, seriously injured or dangerous to ride. Luckily, Norman’s story couldn’t have turned out better: though Chambers-Scussel says she is still getting to know him, he has shown himself to be trustworthy and kind. In fact, one of the farm’s young riders, 12 year-old Kate Schmidt, recently accompanied Norman to a local horse show, where they took first place in two classes. Chambers-Scussel can’t say for certain that Norman had never been in a show before coming to Fox Field Farm, but given his history, it was unlikely.

“He could have just exploded with the newness of the situation, or he could have trusted us. He chose to trust us,” she says. “Kate has such a good relationship with him--her confidence gives him confidence. When they said he came in first place, it was very emotional for all of us.”

While Norman’s transformation is remarkable, so is Chambers-Scussel’s commitment to horses and the people who devote their time to caring for them. She loves seeing the look on a young girl’s face when she rides for the first time, or watching mothers and daughters working alongside one another in the barn, unplugged from technology.

“People need to be in nature,” she says. “They need to break a sweat once in awhile. It’s good for your soul to care for something other than yourself.”